Center for Minimally-invasive Surgery of the Nose, the Sinuses and the anterior Skull Base

How to find us

The nasal sinuses (Fig. 1) are air-filled cavities which are connected to the main nasal passage. There are several sets of paired sinuses including the maxillary, ethmoid, frontal and sphenoid sinuses. The maxillary, ethmoid, and frontal sinuses all drain into the main nasal cavity through the middle meatus just beneath the middle turbinate. In addition, this passage must be open to allow equalization of air pressure in the sinuses. The area where they drain is also known as the infundibulum. 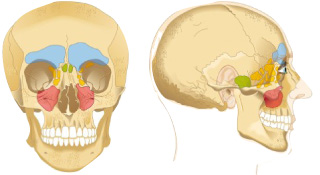 Fig. 1 – View of the location of the sinuses in front and side projection of skull.
Courtesy of Georg Thieme Verlag, Stuttgart R. Probst / G. Grevers / H. Iro Basic Otorhinolaryngology 2006

This area plays a key role in the development of chronic inflammation of the sinuses (rhinosinusitis, nasal polyps), since inflammation and swelling of the nasal mucosa not only leads to nasal airway obstruction, but also blocks the infundibulum leading to impaired air exchange and drainage of the sinuses.

Rhinosinusitis, especially chronic rhinosinusitis, has become much more common in recent decades and is one of the most common medical problems in Western industrialized countries. Typical symptoms include increased infections, post-nasal drip (secretions dripping into throat), persistent clearing of throat, and morning cough. There may also be a sense of swelling in the nose as well as of pressure or pain in the sinuses. Many patients complain of chronic fatigue or other signs of reduced general well-being.

Both conservative and surgical treatment methods have been greatly improved in the past two decades. Nonetheless, one must always remember that chronic rhinosinusitis has many causes and that some cases are most difficult to treat. An exact diagnosis is crucial; then an individual treatment plan must be designed for each person; when surgical measures are considered, this approach should be entrusted to an experienced nasal surgeon (therapeutic concept for chronic rhinosinusitis).

Do you have any further questions?

Our team will be happy to answer your questions.